Green Fire – 7 Generations EcoMinistry was operated between the years of 2000-2006.

The organization relaunched in 2015 and the name of the ministry was shortened to Green Fire EcoMinistry.  It is still operating as of 1-2020 but no program projects are active.

Green Fire is a non-denominational eco-ministry that operates on the principles of Deep Ecology and functions within the Time structure of the Mayan Sacred Tzolkin Calendar.

Green Fire’s mission is to offer charitable services that educate, assist, network, and facilitate the healing and regeneration of the Earth and Her children.

Green Fire encompasses all religious and spiritual outlooks that promote a peaceful existence and a healthy planet.

OUR ECO-MINISTRY PROGRAMS ARE DEVELOPED AROUND:

Green Fire was the heart and soul of my awakening to my path.  As a ‘nomadic’ eco-ministry I traveled to many intentional communities and learned about their history, their current development, and most importantly the wonderful people who had been pioneering cooperative living.

Green Fire was a legal ministry registered in the State of Colorado on the basis of its deep ecology creed and organizational structure that was based on the Mayan Sacred Tzolkin Calendar.

As a member of the Fellowship for Intentional communities Green Fire attended an annual board meeting at one of the most famous and longstanding communities in the US – The Farm in Tennessee.

There was an activist summit happening at the same time and I was able to meet many wonderful people who were engaged in peace and social justice as well as sustainable community development.  The EcoVillage Training Center is located at The Farm as well and I was able to tour and learn about this exciting new community model that is emerging globally.

reen Fire was a vehicle for sharing information and networking between communities.  One of the challenges for these communities at the time was their ability to connect with each other – the internet was still in its infancy and many of these communities were still on a ‘dial up’ if any type of connection.  It became my goal to remedy the situation by launching a network that would serve these islands of amazing communities. Green Fire made corporate history Earth Day 2005 when Hewlett Packard held an Earth Day event at their corporate training center in Roseville, California and allowed Green Fire to attend and table alongside other non-profits.  What was so special about that?  It was the first time a legal ministry was allowed to participate at a corporate event – bylaws of US corporations generally do not allow ‘religious’ organizations to participate as sponsors or vendors at corporate events.  However after several interviews with event organizers and corporate officials they made an exception with Green Fire because of its primary focus and missionary goals were non-denominational and as the CEO put it, ‘rather novel and timely‘.  We spent the day ‘decoding’ attendees “Mayan Galactic Signatures’ and sharing information about the Earth Charter Initiative. 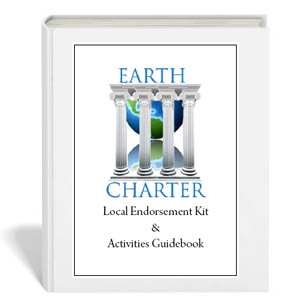 The Earth Charter Initiative was the main project that Green Fire consistently networked and advocated.  Launched in the year 2000 the Earth Charter is a people’s declaration on global interdependence and universal responsibility that sets forth fundamental principles for building a just, sustainable, and peaceful world. It endeavors to identify the critical challenges and choices facing humanity in the twenty first century. Its principles are designed to serve “as a common standard by which the conduct of all individuals, organizations, businesses, governments, and transnational institutions is to be guided and assessed.” (Earth Charter Preamble) The Earth Charter is the product of a decade long, world-wide, cross-cultural, dialogue on common goals and shared values conducted during the 1990s. This process, which involved the most open and participatory consultation process ever associated with the drafting of an international document, is the primary source of the legitimacy of the Earth Charter as an ethical guide.  You can read more about the Earth Charter here… Green Fire had a song that was written and performed by Jesse Wolf Hardin titled ‘Green Fire’.  It was the story of Aldo Leopold, father of Deep Ecology and the Wolf that he shot while he was a forest service worker.  Here is an excerpt from the song:

At Green Fire’s peak it had 8 programs, 5 ‘orders’, 35 ordained ministers, and hundreds of online members all over the country that would have on the ground and virtual congregations on the 12th day of the Mayan 13 day ‘wavespell’.  The 70 page website was full of content and ministry resources for members to access and was quite ahead of its time in many ways.  Issues with board of directors brought me to the hard decision to place the eco-ministry into dormancy or what I call ‘cocoon status’ in 2006.  The ministry will resurrect itself when the time is right and once again blaze trails towards a sustainable and regenerative future.